Support for Raspberry Pi 4 Model B

I have an RS3D without Pi coming. I chose the “4 Model B” enclosure. Does the fact that you are selling the enclosure mean you now support the Raspberry Pi 4?

I thought I read you don’t yet support the 4, but I can’t find the thread. Please let me know. If it doesn’t yet work, that’s fine; I’ll wait or use a 3 for a while.

support for the 4 Model B isn’t quite there yet. it turns out the Pi foundation themselves released the raspbian OS with a bug related to the serial port, which we make use of, quite extensively, as it turns out.

once they release the fix as part of the OS source code, we will be able to continue with our testing and the release. an announcement will be made when the new image is available.

apologies for the inconvenience,

Got it. Waiting is not an issue. I just didn’t want to wast my time if it didn’t work.

How are you going to handle station identification with RPi 4?
The MAC addresses no longer start B8:27, but DC:A6, so the last 4 digits may not be unique.

there was never any guarantee that the last four digits would be unique, nor does this requirement exist.

see here for a complete discussion. but basically: if the name has already been taken, the first letter changes from R to S, all the way around the alphabet. it will be a very long time indeed before we have to worry about what to do with the 27th conflict.

That’s interesting. I didn’t realize the station ID is based on the MAC. I’ve got my 3D up and running on an old RPi 2B as AM.R0104. I guess it will change IDs when I switch it to an RPi 4. Ditto for my 4D and Boom as I’m likely to switch those to RPi 4s also, when the 4s are supported.

We have released support for the Raspberry Pi 4 Model B. Click here to read the release notes. The microSD card image has been updated.

We are all sheltering in place here too (San Francisco Bay Area). I wish you and all your families a safe journey through this crisis.

Hi Branden,
My apologies if I got this wrong, I just received my new RS4D today and assembled it with a Raspberry Pi 4 Model B. I downloaded the latest image as linked, and extracted it to a new 8GB MicroSD card. The Pi will not boot, claiming the image is out of date. (See attached photo). Am I missing something? Thanks. 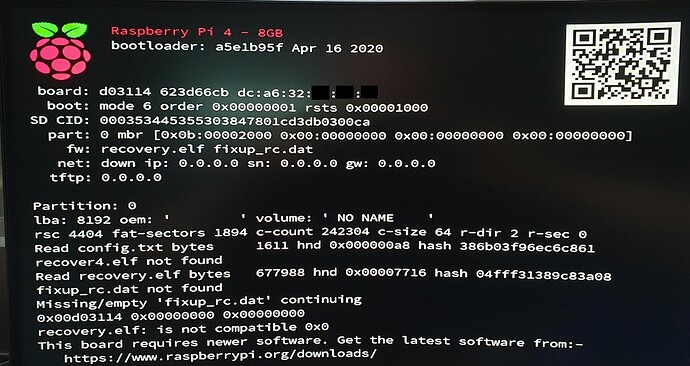 release for 4-Model-B support is imminent. we had previously released an image to support the new Pi, but became aware of an issue with the serial port where the OS version required to support 4MB was not interacting with the data transfer from the MCU over all time well enough to meet our quality standards.

consequently, the image supporting 4MB was replaced with the previous image that does not provide support for 4MB versions of the Pi. in the intervening time we have been working to find a solution to this problem and after digging very deep into the OS have identified a solution and have been in the process of testing this to confirm its veracity. testing is nearing completion and once certified, we will again update the image and make an announcement.

in the meantime, you will either have to use a prior version of Pi, if you happen to have one, or wait for the release of the updated image.

apologies for the delay, the update to the new Pi model has turned out to be more issue-laden than we would have liked. but since we have a dependency on a computer made by another company, this is a fact of life we can’t avoid.

Thanks Richard, I’m just glad it wasn’t me being a bit dumb!

Happy to wait for the new release.