I made a small outdoor vault (still in progress). The concrete pad surface is 14 inches across, and is 28 inches below grade. The pad is mostly 2 inches thick but the center part has a 6 inch cylinder going about a foot down. All told it used about 80 pounds of cement. Underneath the corners of the pad are 3.5 inch boreholes going 2 feet further down filled with sand, to help drainage. The sidewalls of the enclosure are made from 8x16x2 inch blocks and are just outside the pad, so they sit on surrounding sand and not directly on the pad. This was actually intended for a different device, but while I’m still getting that ready, I put a R-Shake AM.R79D5.00.EHZ into it to see what I could see. It uses a Pi Zero because I was originally thinking of putting it in a small diameter borehole and wanted the smallest possible package. Then I found out at my location even a 40 foot borehole wasn’t much lower-noise than the surface, and had the disadvantage of being underwater.

The vault is right next to a road, only about 5 feet away from the road edge. Not an ideal location, but the easiest place to build this, and during the night there isn’t much traffic. I knew I would see cars and trucks, but I was surprised to find that it easily picks up both pedestrians (each footfall makes a clear spike) as well as bicycles, due I guess to the texture of the road surface. Even though it’s not terribly deep, I notice the reported CPU temperature only varies +/- 1 degree C from day to night. I have a second RShake outdoors above ground in a small enclosure and it varies over 10 deg. C. 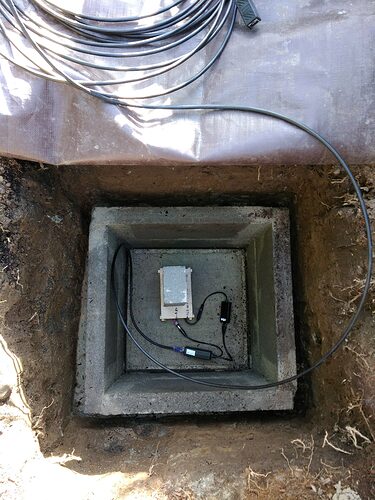 here is a closer view. Because I used a Pi Zero I also needed an external USB-Ethernet adaptor, and I am using an external PoE -> 5V converter as well. 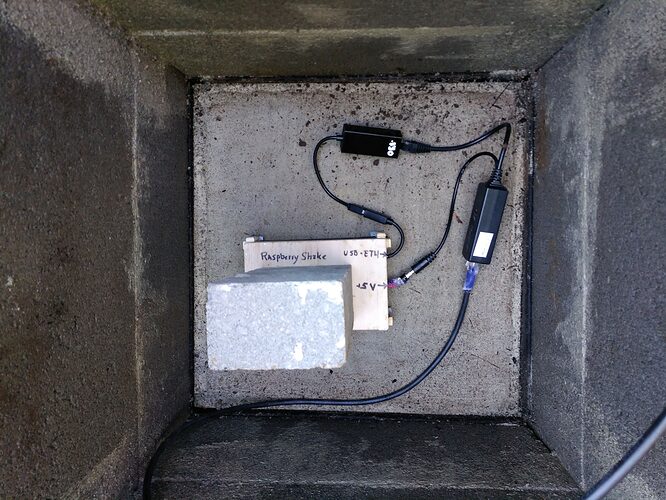 Here is an example of a pedestrian on the road. This one is me but everyone I’ve seen has a similar walking pace, about 2 steps per second. I’ve noticed people walking together often walk in step.

How does the spectra look?

Here is an example: two people walking, a car, and then a jogger. All the foot traffic was along the far edge of the road, so about 40 feet away at the closest point of approach to the R-Shake, which sits underground on an 80 pound concrete block. It is impressive to me how sensitive a detector this is.

If you meant background noise, here’s an example around 3 am local time with no cars passing immediately nearby (but maybe some farther away). The two constant tones at 19 Hz and its 2nd harmonic are likely from some HVAC fan nearby. In the bottom plot of the spectrum there is a peak between 0.2 and 0.3 Hz which may be the background microseism from offshore wave action.

You’re right, 9.2 km/sec is at least a couple km/s too high. The residual error on the location and depth solution is on the order of ±10 km, which probably accounts for a good deal of the problem. This is likely because there’s not enough broadband station density to give a good depth solution. You can see how many stations are used for this solution here. As you can see on the Phases page of the quake summary, they weight picks from stations as far away as Hood (!!) for this quake pretty highly. This is because, although Portland is instrumented with quite a large number of strong motion sensors, the broadband density is still dismal.

This is a good demonstration of why network density matters. Your Shake was sitting pretty close to directly above the hypocenter, and thus your picks are probably more accurate than what PNSN or USGS can come up with in a solution that’s weighted so heavily on stations ~80 km away. Cheers!

If you want to calculate a more accurate hypocenter solution (for example in SWARM) using the Shakes in the Portland area, it’s probably safe to use a P velocity closer to 5 km/s as detailed here.

Hi Ian, thank you for this very informative response and links! Yes, I see my station is quite a bit closer than any they used for their solution. I was not imagining that I would have any better information than the professional network, but it seems that location does count for something.

Another observation: my underground vault is at the front edge of the yard, which is 35 feet from the nearest point on the foundation, and about 50 feet away from the center of the house. When I simply walk around inside the house, even on the 2nd floor, the sensor still picks up each footstep. Quietly standing up from a sitting position on a chair is still visible. From one point of view, the Shake is impressively sensitive. On the other hand I had hoped the outdoor location would have better isolation from what I think of as fairly low-energy indoor noise.

tinfoil hat tip: if you’re worried the neighbors may have a R-Shake and are snooping on your movements, just run the clothes dryer- in my case, that causes enough noise to drown all this out!

I need to move my seismometer to a better site as wind an drain on the roof of my remote “shed” is increasing the background noise. Is the bottom slab of your vault connected to the sides? I am going to use some 2x2 slabs to make an outdoor vault and wonder if the sides should be acoustically isolated from the walls? If so then I would use a soft mastic to seal the sides to the floor block. I do also need a small sump as I have a high water table. A pump and float valve will be required!

Thanks for your interest! The bottom slab is isolated, and not connected to the side walls. It is just slightly smaller in size, so in theory the bottom could float up and down by any amount. You can see a dark line around the bottom edge which is two layers of heavy tar paper at the boundary between the edge of the poured slab, and the concrete blocks forming the side walls. In practice I don’t know if that made much difference in my situation, but it seemed best in theory. I also have several drainage holes at several depths, leading downhill and away at an angle, filled with sand. The top has gaps open to the side, but there is a crude tar-paper roof over the whole thing to prevent direct rain coming in. No water accumulation problem yet, even with our wet Oregon climate. It helps that the whole area is on a slight slope so there’s surface drainage as well. I wouldn’t have tried to put this down below a water table level; active pumping means too much maintenance in my opinion even if it was vibration-free.

One other comment: unless you can make it really tightly sealed, in my area I’ve found it better to make outdoor enclosures as ventilated and open as possible. If you can get some access to open air that seems to discourage ants who are always looking for sheltered dark dry spaces for their colonies. I had to wrap the mailbox post in sticky tape to keep them out of the mailbox.

Thanks for a really informative response. My vault needs to be water-tight as I have a high water table and also I live in Wales which is renowned for it’s rainfall.

My latest plan is to use a 40 litre lidded container from “really useful box” 95% buried in the ground. I will create a six inch slab underneath the box. While the slab is still wet the 40 litre box will be placed on top to ensure the lower box profile matches the slab. Then I will create a slab inside the box for the RS to sit on. I am hoping that the mechanical coupling between the two slabs will be good enough. Ants are not really a problem here but mice and earwigs are so some defences will be deployed.

its interesting that people usually walk at quite a constant pace … that’s one of the tip-offs that you are seeing footsteps.