So how far away can the Boom detect lightning strikes? Today, I am noticing a lot of the following waveforms and wondering if it could be lightning. At the current time, I am about 200 miles from where they are having a lot of lightning strikes in the Sierra Nevada Mountains in California. 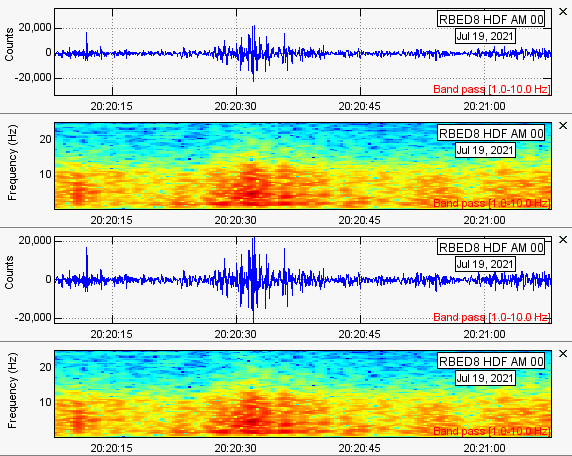 This could be quite an interesting trial! We don’t have a reference for long range lightning detection, only short range events. You can see an example in our manual here: Raspberry Boom (RBOOM/ RS&BOOM) Infrasound Monitors — Instructions on Setting Up Your Raspberry Shake

We encourage you to continue these detections and see if the correlations pile up! Looking forward to the results!

In comparing the two, it doesn’t look like it would be lightning and thunder. Unfortunately, the wave of tropical moisture that came up from the South and caused all the lightning and thunder has moved on and the lightning has dissipated. I did some more checking however and found some other interesting waveforms in that timeframe that would suggest that the Shake and Boom were detecting thunder.

What the RBoom detects is thunder, not lightning.

I think 100 miles is certainly possible. More, if you get some sort of atmospheric ducting condition.

If you have an RShake, you can see it on there too. A really strong thunderclap will send you a seismic wave and then, some time later, the infrasound will arrive. If the seismometer is surface-mounted, then strong sounds will shake the earth surface and register on RShake as well at essentially the same moment as the infrasound. The difference between RS and RB response is that the sound easily goes down to below 1 Hz. But it gets progressively harder to shake the ground bas you go below 10 Hz.

We had a thunderstorm (not a big one) pass thru followed by a calm wind condition. This let RB clearly see thunder sounds as the storm receded. [thunder1] The thunder claps (at a distance) are relatively short impulses with a mostly 10-20 Hz energy content.[Thunder3-2020-06-05 23_55] One thing you can see - that is similar to distant artillery - is that the seismic surface wave arrives before the sound, followed by another seismic response that is the local surface being shaken by the sonic pu…

There are some storms that went by here a couple of hours ago, Below is what I am seeing (likely) from the storms a short while ago:

The strikes are not all that frequent (confirmed by Blitzortung - note the time scale) .

The storms are out over the ocean now so unlikely to register on RS. At the time of this trace, the storm was a bit over 100 miles away. The storms are about 160 miles away now and I don’t see them any more.

Thanks a lot for the great info. I have a better understanding of what’s going on now and it helps a lot in knowing what to look for. We don’t get that much lightning and thunder in the San Francisco Bay Area, maybe once or twice a year so, I might have a long wait till we see those conditions again.