Notes on how I use my Raspberry-shake

I have been running Raspberry-shakes since early 2019. initially with a RS1D and then upgrading to a RS3D.

I am located in the south-east of England (a fairly quite region seismically), but it is still possible to detect many types of seismic activity, ranging from local infrastructure (roadworks, helicopters, thunder, quarry blasting and traffic noise etc) as well as many earthquakes from around the globe.

The two charts below show all of the earthquake events I have managed to detect during 2022.

I document any event that registers on a day-plot (2Hz low-pass filter applied). To help confirm the event, I then check the 3 components from my Raspberry-shake against one of the nearest IRIS monitors to my location here in the UK, together with other Raspberry-shakes. Details of the event are then taken from the ShakeNet Station map for plotting on a global map and charts showing Magnitude versus depth.

My results from the last 4 years indicate that in general I am able to detect relatively low magnitude events nearer to my location. Events farther a field (beyond Western Europe) are at least magnitude 5+ and those at the greatest distance tend to be mostly above magnitude 6 and at greater depths.

The majority of events are located on or close to tectonic boundaries. Collecting data from the last four years has enabled me to map these boundaries quite well. 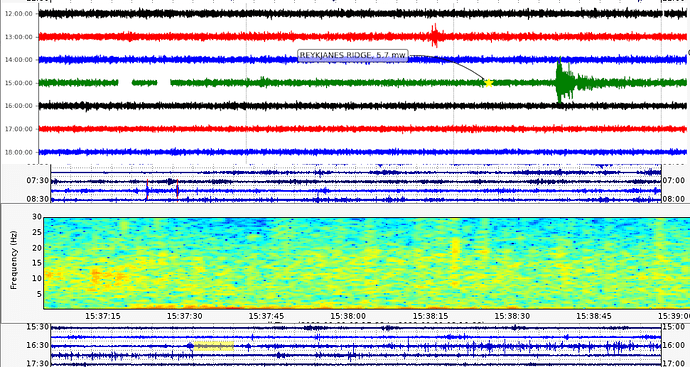 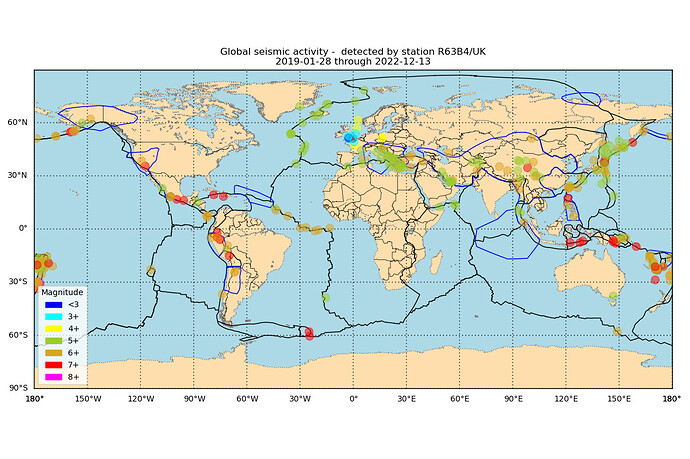 An amazing presentation mjohnp, thank you for taking the time to collect all this data and compile it in the charts you’ve shown us.

I should do the same with mine, thinking about it, as I have had a Shake since early 2020. Only have to find the time to do it…

I’m glad you liked it. I thought it might be useful to show the range of what can be recorded from my part of the world using the Raspberry-shake.

I have a new RS3D. It is up and running. (due to the great NYT article) I have shakenet app on iPhone and web connectivity through Mac. I downloaded swarm files. I majored in math, and have an MS in stat, but I never took physics. I need help in understanding the data I’m seeing. Can you recommend a book? Can I pay for an expert to help me develop the understanding I need? I’m not a software developer, so many of the help responses are over my head. I need to get Java. Any ideas? Thanks.

Good to see that you have got everything up and running. The shakenet and swarm apps are both excellent for monitoring seismic activity. I have also started using the Dataview web app, which you can run from the Shaknet website (under web apps tab).

I have a geophysics background, although not in earthquake seismology. I’m afraid I don’t know of any specific books that I could recommend on the subject that are not technical. However, I would suggest that python might be a better option than Java for coding to view and analyse data files, as there are already python modules for doing this. I use ‘obspy’ for plotting dayplots and waveforms etc. The charts I posted previously were made using ‘matplotlib’. The global map was also generated using python.

It can be a little daunting to understand what the shaknet and other apps are showing you at first and how to discriminate between the various types of energy you are seeing. However, the various apps provide most of the tools you need to start to do this.

The ability to detect signs of earthquakes amongst all the other signals and noise, depends largely on where you are located in the world and how seismically active the region is. However, as I mentioned in my previous post, even for somewhere seismically quiet, it is still possible to detect their telltale characteristics. However, they maybe very small and seemingly insignificant against the background noise if arriving from a large distance.

The example ‘obspy’ dayplot traces I posted previously (filtered to remove noise above 2Hz and annotated with the earthquake location and magnitude) had a very obvious signature. A sudden large kick as the P, S and surface waves arrived. The same event is shown on the spectra plot as a band of energy running along the base of the display, before gradually diminishing. The other more random features are local background noise. The small zone highlighted in yellow on the smaller scale ‘swarm’ dayplot traces, beneath the spectra, shows how insignificant the arrival was when compared to the background noise. The spectrum includes frequencies up to 30Hz.

I should mention that earthquake waves that arrive after travelling a large distance will be detected at very low frequencies, below 2 Hz. However, earthquakes originating from closer locations will include a much broader range of frequencies. See the the first example below.

The second example highlights a difference in the level of local infrastructure/ human generated noise between daylight hours and night, which is often present close to more urban areas. Most of the features are cause by local road traffic. Individual vehicles can even be identified in the quieter periods.

Use the station view web app to see where earthquakes have occurred around the world. Generally the larger ones in my case. You can then use the other apps to scan through the trace and spectra displays for the event arriving at your Raspberry-shake. This may not occur for many minutes depending on how far away it occurred. A suitable candidate should hopefully appear as a higher amplitude band of energy or perhaps several pulses.

If you are located somewhere seismically active, then even mild tremors will likely stand out strongly against the background noise. Very strong events can even swamp the displays.

The Raspberry-shake 3D shows energy that arrives with vertical motion (Z), which may have even travelled down to the planets core on its path to your location. Surface waves from events that are closer, will be detected along either a north-south (N) or east-west (E) orientation. See third example.

Lastly, it is also useful to try to identify the origin of other types of features in your data, such as those I mentioned in my previous post. I have included a few example traces/spectra at the bottom of this post.

I hope that some of this is of use. 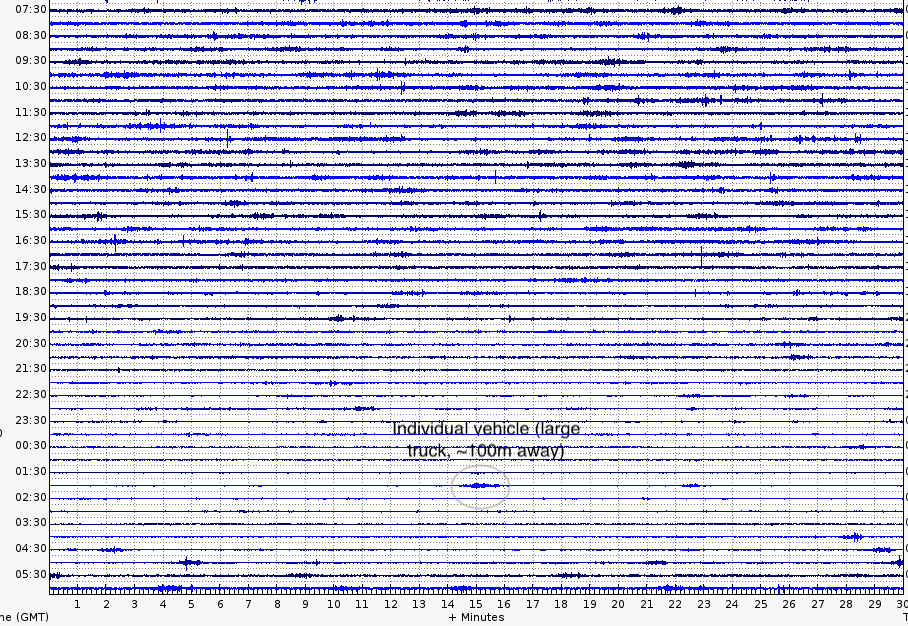 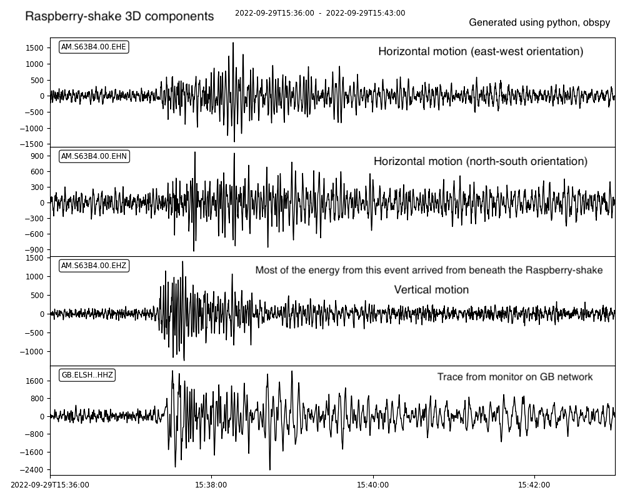 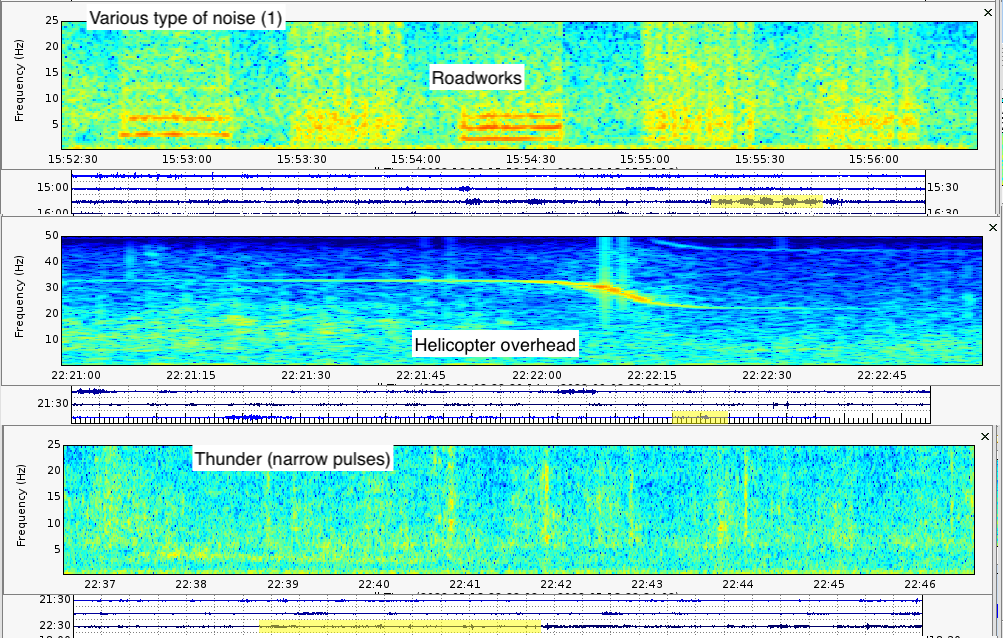 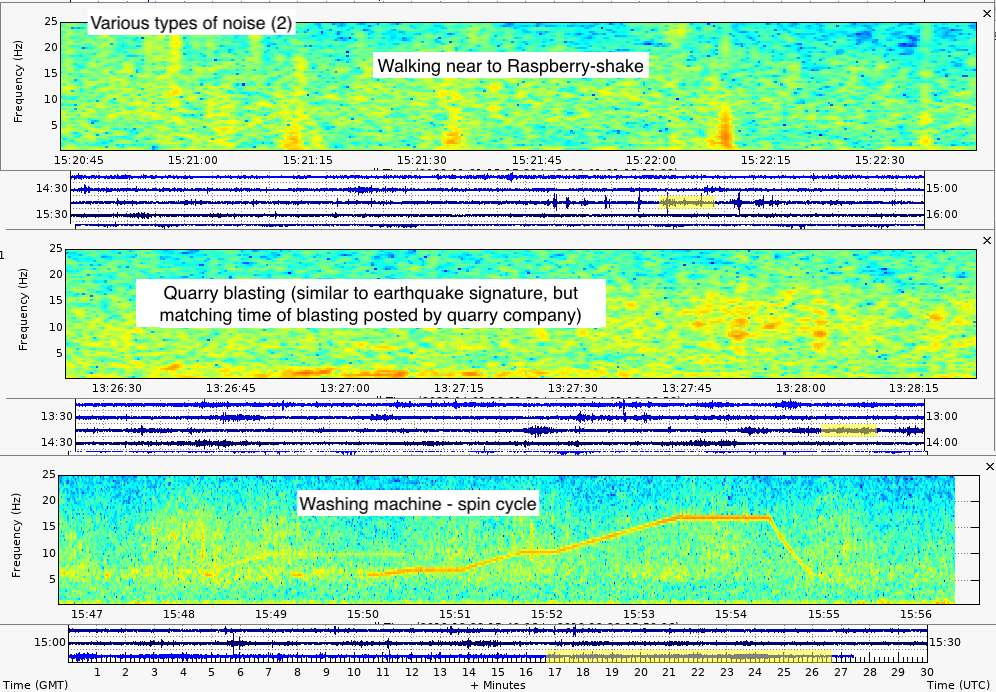 I will only add that there are also Python resources to get started (once you have a basic knowledge of Python) on our manual, on these pages:

and also here on the forum (a bit more complex): My current Python Report for code examples