In recent days, we have had a low-altitude temperature inversion (red circle) that seems to create a ducting effect for infrasound. 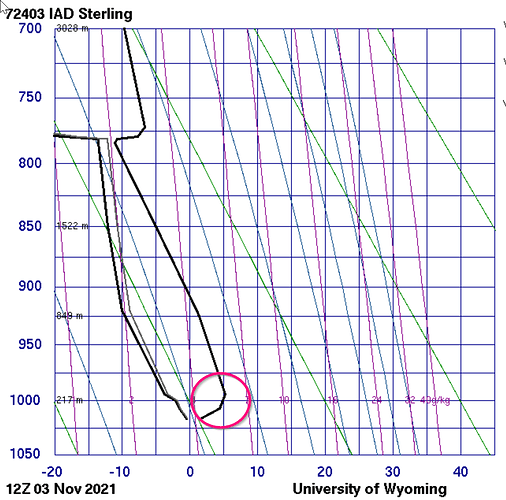 Shown below: my RB (176D) and two others nearby all registering a 4.7 Hz signal which is likely the harmonic of a wind farm quite some distance to the west of us 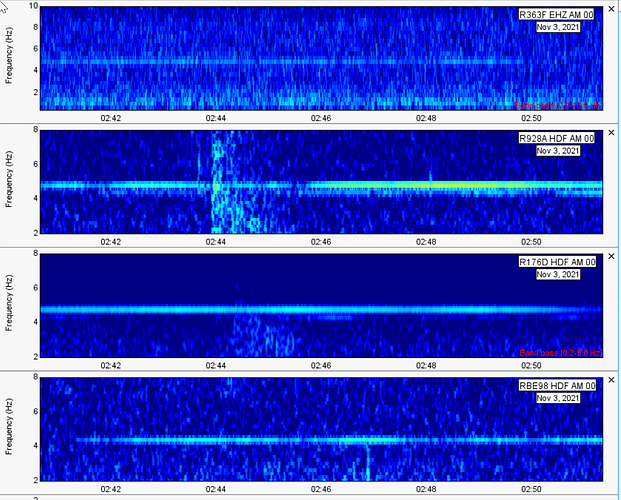 The top trace is from my RS, where you can see the same signal as RB. This seismic signal was visible on several other nearby RS installations as well.

It’s difficult to shake the ground surface at 4.7 Hz! So this is quite impressive, especially considering that the nearest large wind farm is 130 km away from here.

I see my previous posting on this subject was in November of last year, so there must be something in our climate that favors forming this sort of acoustic ducting this time of year.

Various papers on this subject note that ducting can cause wind turbines to be detected “some tens of km” away. This is considerably farther than that.

On infrasound generated by wind farms and its propagation in low‐altitude...

I love your posts @kpjamro. I always learn something.

I remember reading similar studies when I was researching in Windfarms for my Master in renewable energies.

Ducting in November? I’m confident one of the reasons is that the long nights in November allow a lot of radiational cooling of the ground and that leads to deep inversions. I’m less confident about why you haven’t mentioned December and January, guesses include cooler ground conditions (less radiation) and winter time clouds (I live in NH, but I did make it to Yellowstone once in January, pretty cloudy period). That you have such a strong 4.7Hz signal makes me wonder if there’s some weird resonance involved that might involve topography, air temperature, and who knows what else.

That’s great paper you found. I have to save that for later reading when I do have time to honor it.

BTW, I got my RSB to try to record wind turbine infrasound and convert it to something audible that people can get a sense of how it changes over the course of a night. So far no time for that, but boy, what an amazing instrument, both the Shake and Boom.

I learned a huge amount about exploding meteors last October.