Why SWARM instead of Dataview?

I’ve had a couple of tweet replies from Raspishake asking why I don’t use Dataview. Well I do, but I find SWARM more convenient for a lot of what I do.

I have a Shake and Boom. When I open SWARM I usually tile both helicorders across one 4K screen so I can easily compare the seismic and infrasound signals. Often I’m looking for meteors and if I find a likely meteor signal, I check the seismic trace to make sure it’s not triggered from a seismic event. As far as I know ATM Dataview can’t have two helicorders side by side.

When it comes to features to enhance Dataview perhaps some way to identify cross channel triggering (particularly for the shake and boom) would be nice. That’s essentially what I’m doing with the helicorders side by side (to make it easier for me to manually choose the right times to compare the waveforms in detail also side by side). However, the ability to plot both channels on the one helicorder and wave detail in different colours might be another but better simple way to do it.

I have toyed with other ideas for checking for cross channel triggering/interference such as writing python code to compare the change in both channels (essentially the derivative of the one channel divided by the other) but that a bit beyond me yet.

That’s the main technical reason I use SWARM in preference to Dataview (though I still use Dataview for a calibrated air pressure signal of a meteor signal). Apart from that, it’s simply familiarity and convenience - I have it open looking for meteors, so use it.

The only other reason SWARM may be more useful is IF I HAVE IT OPEN and I hear something that might be an interesting infrasound signal (or one I’d like to be able to identify later) I can watch the trace in SWARM with (I think) less lag than Dataview.

Well, you can always do this: 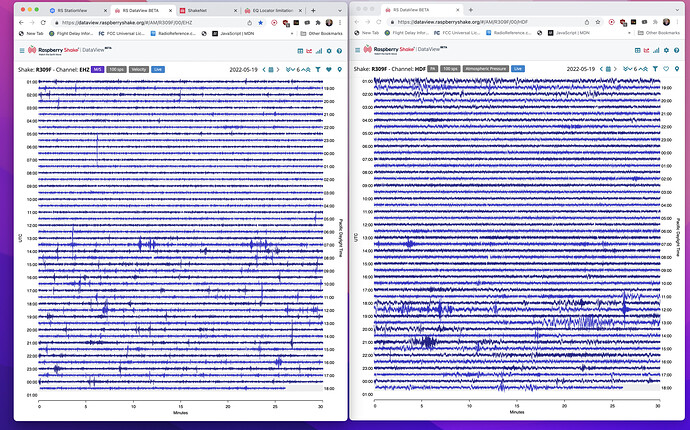 Wow, thank you so much for all the feedback that you have provided! It’s a literal info mine ready to be discussed with our software team.

As of now, Philip’s solution is the best one if a user wants to compare both helicorders, but I will open a ticket to see if we can put multiple helicorders on the same DataView window, similar to what we do with multiple live traces. Adding different colors could be interesting too, to further differentiate the various waveforms.

The delay in DataView updating the live trace may depend on your internet provider performance, but usually is in the range of 1 to 5 seconds behind real-time. We have implemented various resources to lessen this value as much as possible in a way to offer the best user experience.

Cross-channel triggering is a bit beyond the scope of what DataView provides as an instrument, but never say never. I will open another ticket with this second suggestion, and we will see what can be done in future upgrades.

@Stormchaser another thing they might like to consider, which I think could be useful in this application, as well as generally would be:

An option so that rather than auto-scaling the the helicorder trace to a max (peak) of some value, allow setting it to some amplification factor, and setting a clip level to prevent spikes from being too large - the clipped area of the trace could be highlighted in some way - color?

This would prevent a spike from “compressing” the whole trace and hiding detail.

have a great weekend and thank you for taking the time to write us.