What is the Spectra View on Swarm

Could someone please help me understand how to interpret the Spectraview on Swarm. How is it different to the wave view and what info does it give us?

Attached is a spectra view for an earthquake.

These graphs, taken from the on-line dataview application are not of an earthquake, but of a pass by a large twin rotor helicopter (Chinook style). As you have probably observed if one of these flys over your house, it shakes the ground, so gets picked up by a seismometer quite easily: 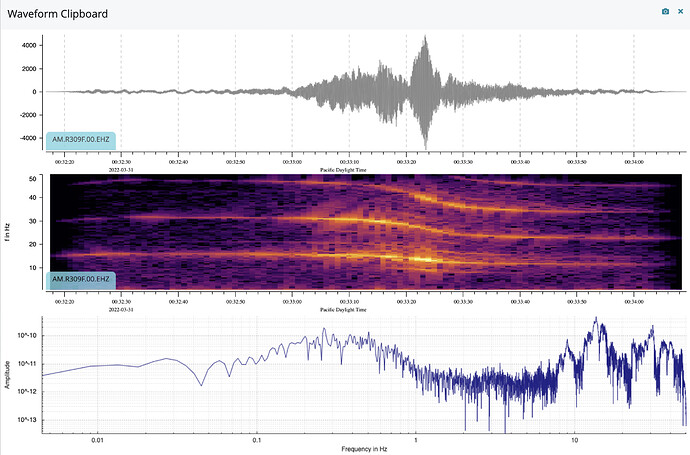 The top trace is the “wave” view, showing the ground movement.
The second one is the same signal split into different frequencies over time. The higher amplitude the signal at the given frequency, the brighter the image.

There are three really obvious frequencies, and you can tell it is a moving object causing this by the doppler shift in the frequency - higher as it comes towards us, gets really intense overhead, then the frequency and intensity drop off as it goes away.

Look at the frequencies of these lines of light … one about 14 Hz, one about 30 Hz and a smaller one at about 47 Hz.

I will leave that to the real geologists to answer.
But my “gut” feeling is that the graph would look quite different between (say) a landslide, a volcanic eruption and an earthquake. So maybe not totally useless