Hey all – New member here. I am fairly confident that I can benefit from the RS and or RS/RB to monitor and collect data on quarry blasting near a new home that I am building.

I have tried to dig into the information but wanted to reach out for some guidance.

I am considering what model of the Shake line that would be appropriate for this. I believe that the Shake would be enough to obtain intensity data on the blasts. Would the Boom provide any unique data that the Shake may not? I realize that the Boom will deliver different information, but is there recommendation from those with experience using these as to which RS/RB/RS+B would be best for this application? Thanks in advance! Really excited to explore this community and contribute once I’m up and running.

Hello philfry, welcome to the community!

I think our @wmvanstone can be of help, since he uses our Raspberry Shakes to monitor nearby quarry blasts.

We are eager to see you active in the community!

I personally use a RS 1D, but have access to data from other devices, including RS 4Ds and a local Geological Survey broadband seismometer with N-S, E-W and vertical geophones. The way I identify quarry blasts is by looking at the arrival times of the waves on several devices and using those to locate the source in one of several local quarries, which I can see on Google Earth, so my method is not particularly sophisticated and it relies on having several local seismometers for triangulation. In terms of choosing particular devices, I can’t comment on the RB or RS+B, not having used them. I can’t see much point in you buying a RS 4D, since the difference between that and a 1D is the strong motion detectors / accelerometers that won’t add to your knowledge of the quarry as far as I can see. I would love to have access to data from a RS 3D, with three orthogonal geophones, but it is considerably more expensive than a RS 1D. The frequency characteristics of the waves from the quarry are different to the waves from seismic events, but I have not looked into this in detail, it is on my long list of things to do. You can produce spectrograms from the single channel on a RS 1D or on multiple channels from the 3D. R614C and REE67 are a RS 4D and RS 1D next to a slate quarry in Cornwall, UK, if you are interested in looking at what they detect. That particular quarry mainly uses cutting rather than blasting for slate extraction, so it may not be representative of the data you would be collecting. I have attached the latest quarry blast detected on my personal seismometer and several other local seismometers, from a quarry near Penryn in Cornwall, UK, so you can see what I do with data that originates from a source which is less than 10km from my home. 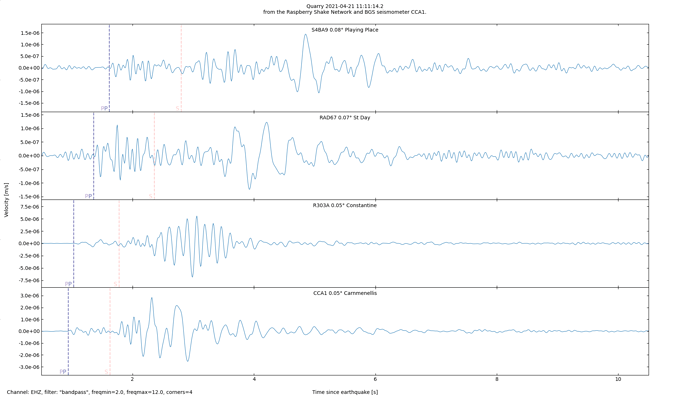 This is very helpful! I appreciate the information and will be sure to post about my experience when I start collecting my data. Really appreciate the help.