Still struggling to recognise a quake

There were a couple of big quakes in the Philippines on the 13th at about 21.00. From what I can workout from the great Google, it should take about 12 minutes for the p-waves to travel the 11000km from there to my Shake in Spain. I’ve looked at my traces but I can’t work it out.

If some kind soul could spoon feed me this one thing then I’m sure I would be more self sufficient. My station is:

Ideally, I need someone to point to the spot on the trace and say “That’s an earthquake”. I’ve read lots but at my age I don’t think I’ll live long enough to learn this stuff

Thank you in advance
Andy

Yes, the first times it can be a bit frustrating trying to score around and around to find some traces that resemble the ones from an actual earthquake. 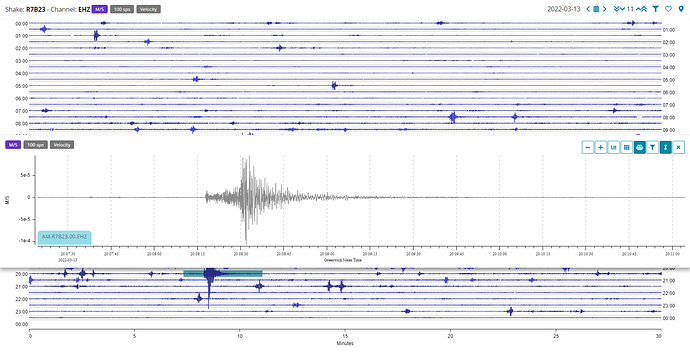 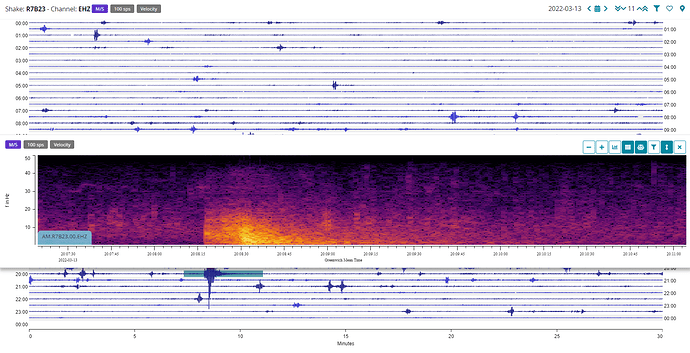 You can see how the P-wave arrives, when the vibrations immediately start from a “calm” background noise, and then the more high-amplitude S-waves arrive, just around 10 seconds later. You can use this as a reference, both the waveform and the spectrogram. If what you see resembles this, then it could likely be a quake.

Regarding the Philippines’ ones, I think that you are in, or very close by, at your distance, to the P-waves shadow-zone. This is an area where no P-waves will reach your seismometer, unless the earthquake is strong enough to allow detection of core waves from your location. The matter becomes a bit more complicated, but I’m sure these pages can get you started:

A seismic shadow zone is an area of the Earth's surface where seismographs cannot detect direct P waves and/or S waves from an earthquake. This is due to liquid layers or structures within the Earth's surface. The most recognized shadow zone is due to the core-mantle boundary where P waves are refracted and S waves are stopped at the liquid outer core; however, any liquid boundary or body can create a shadow zone. For example, magma reservoirs with a high enough percent melt can create seismic sh...

Seismic shadow zones have taught us much about the inside of the earth. This shows how P waves travel through solids and liquids, but S waves are stopped by the liquid outer core.

In any case, if a distant strong or major earthquake waves (let’s say from magnitude M6, 6.5 and above) reach your location, you will likely see high-amplitude waveform from the start of the event, like a wall rising up from the calm trace before it.

You can also use our ShakeNet App Mobile and Web Apps — Instructions on Setting Up Your Raspberry Shake to help you with arrival times and checking out the waveforms. Trust me, after a bit you will easily be able to distinguish what you are seeing.

This is brilliant! Thank you so much! Now I’ve seen one, I will continue my reading. This is really, really helpful and very much appreciated.

Remember, if you have any other questions, just write here, and we will do our best to answer them!

A bit more info for you, which may or may not be helpful.

This morning (my time - West Coast USA) I saw this:

It looks pretty much like an earthquake … Checked surrounding RS devices, and most showed something but really not as big or clearly defined as I was seeing on mine. I almost wrote it off as something purely local. Then saw that there was a 7.3 earthquake just off the coast of Japan.

Checked the timing, and this is roughly in the right area. Not a nice clean P-S trace, but 7,500Km away, it is pretty likely that.

Yes, I got the Japan one too. The app is the game changer for me as you click on a quake and it takes you straight to the right point on your station. Then you can cross reference that with the browser version.

Yes, the app is good for that. I am hoping that some of that makes its way into the website version (DataView) one day – easier to read my Mac screen than my cellphone