Over the past few days I have seen a couple of fairly small earthquakes which appear to be local.
This is the area: 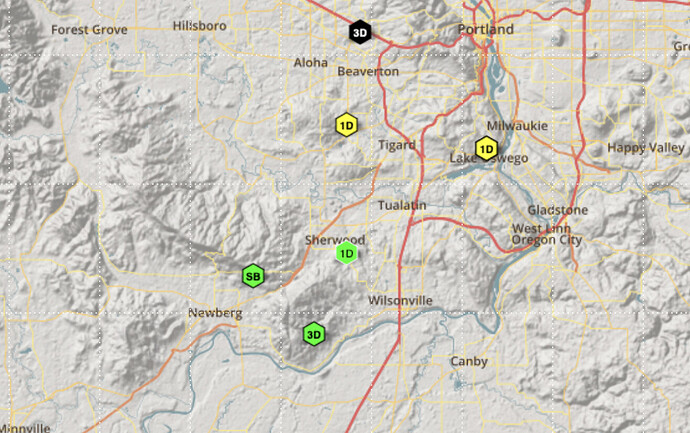 The stations of interest are mine (SB, North of Newberg), the 3D to the East, and the 1D to the North-West. I both cases the signal was much weaker on both the 3D and 1D stations. The 1D station shows a later arrival, so the even looks like it occured to the south.

For reference, the distance between the SB and 3D stations is ~3.5 miles.

There is a fault which runs through Newberg (The Newberg Fault, would you believe?). USGS shows it are inactive, but I suspect that is because it is not closely monitored and hasn’t generated any significant event for some time.

I have a question about the recorded data:

Assuming these are P and S waves, that would make the event quite a distance away, So far that I have my doubts about these actually being P and S for the same event.

Any thoughts on what I am actually seeing here?

EDIT: This evening, there was a loud noise. Sort f like thunder, but not quite. A couple of minutes later the local FaxeBook group lit up with reports from right across the town of people hearing the noise and their houses being shaken by it (I didn’t notice any sort of shaking here). This really doesn’t look like an earthquake to me. Again, detected by the other two stations, but nothing that I could see beyond.

Also showed up as a good strong signal (at least part of it did) on the infrasound channel:

If it is a P and S wave from a local quake, then 12s time difference puts the quake about 100 kms / 62 miles away. Given the spacing of the 3 shakes at about 3.5 miles apart, you’d be looking for a “difference in the difference” ;o) between shakes of about 0.7s, so to do that I’d recommend zooming right into the P and S waves on each quake and record the arrival times and work out the differences for each.

The most accurate you could measure is to 0.1s on DataView so if you got say 12.0, 11.7 and 12.4s from the 3 stations (or something similar - you’d need to look for a maximum difference of 0.5 to 0.9 between the three P-S differences) I think that would confirm they are P and S waves.

You could also check other Shakes within a 100km radius and see if it shows up there.

The second event that registered so clearly on the Boom looks to me like an explosion of some sort. The preceding seismic wave is bigger in amplitude, yet doesn’t register on the Boom, so the Boom signal is definitely Infrasound (not seismic triggered).

BTW I tried to have a look at your data but couldn’t find the signal in question. I gave up trying to convert Pacific Daylight Time to Australian Eastern Daylight Saving Time and guess the date… It’d be great to be able to use UTC and/or the time local to the station! (just waiting for that to be implemented… we have suggested it ;o) )

Yes, I came up with ~120 km for the distance of the last event (if they were indeed P and S waves). Since no-one outside the local town mentioned thos, and the seismometers outside of the three didn’t see anything, the only conclusion is that they aren’t P/S waves – they don’t really look like it anyway.

An explosion was the closest fit I could come up with. That would fit with the second part, and with it definitely being detectable by the infrasound monitors (as well as many people’s ears - including mine).

That first, long, drawn out part though … related? Highly coincidental if not.

Agree on the possibility to display choice of local or UTC, I think I may have suggested that too.
As of Sunday, we are 5 hours ahead of Sydney. (Our DST change was a week later than the rest of the world - US government posturing - “doing something”, even if it is unhelpful and disruptive).