Hi everyone!
I am trying to check some signal processing routines that I mainly use to analyze seismic noise, attempting to use the RShake as low-cost approach.

I tried to quantify the RShake 1D self-noise at home, i.e. I disconnected the geophone from the board.
Then, I acquired 20 minutes of data (velocity stream) at the office. I downloaded the data in .miniseed, but I also performed a PSD (Welch’s method from scipy module).

I tried to plot all those spectral estimates on the same figure. I got the one attached (SELFNOISE). 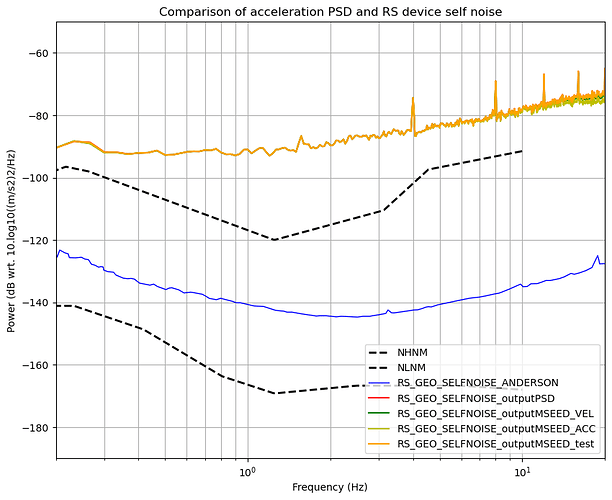 I am quite surprised as the selfnoise PSD that I computed are way above the selfnoise curve given by Anderson (about +50dB).
I also get some spurious peaks at 30Hz and above, but my office may be very noisy in terms of EM emissions.

I must have done something wrong, but I don’t get what… any help would be very much appreciated!

PS: I also carried on some measurements on a high tower in my city (attached figure VERCORS). I clearly measured the building’s fundamental frequency, but thing become messy at higher frequency… 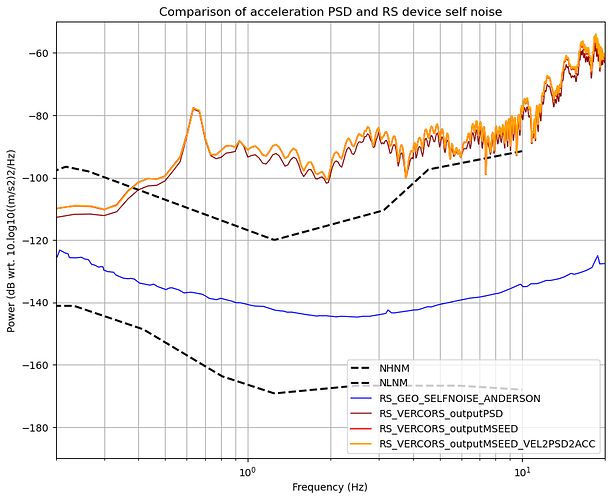 And here are the codes / data used to generate the plots:

HI Pierre! Can you be more specific? What does “lsb” mean? What spec are you using?

Please note that the RS is treated as a single system (geophone+digitizer) in the self-noise study in the technical specifications. To derive the self-noise, the Sleeman method is used.

Hi Branden,
thanks for your answer!

I just converted the numerical signal from the miniseed [in counts] back to ground velocity [in m/s] using:
Signal (m/s) = Signal (counts) * lsb

This works pretty well when in the flat domain of the sensor (I don’t require an exact response correction, but getting the order of magnitude of the signals for comparison with Peterson experiments is important to me).

Concerning the self noise estimation, I am not familiar with the Sleeman method. I can see that your tests yield a self noise curve very similar to Anderson’s one, which appears consistent!
What I don’t understand is why I don’t get something similar when processing my signal acquired without sensor connected.

What I don’t understand is why I don’t get something similar when processing my signal acquired without sensor connected.

Not having the sensor connected will change the response of the digitizer. You need the load. Our system is tightly integrated and it does not make sense to look at the digitizer and sensor separately …

Hi Branden, thanks again.
Ok I got it… I’am not very familiar with the electronic stuff…more applied geophysicist.

Anyway, I’ll try to record more signals on various structures (such as the Vercors tower above, but also natural structures) and compare them with NLNM and NHNM curves.
I’ll let you know what it gives as a result, I am trying to adapt the RS1D to my special needs (e.g. I already replaced the vertical 4.5Hz 395Ohm 23.4V/(m/s) geophone by an horizontal 4.5Hz 375Ohm 28.8V/(m/s) to run some tests).