RS4D: Is there data, maybe a graph, showing distance vs magnitude of seismic events that can be detected by a single RS4D?

Hello, as the title says, i’m looking for a chart or data of some kind that breaks down seismic events by magnitude and distance that can be detected by the raspberry shake 4D. The best I could find was a statement on a raspberry pi blog (Raspberry Shake - your personal seismograph - Raspberry Pi) that the Raspberry Shake is sensitive enough to detect earthquakes of magnitude 2 as far away as 50 miles, and earthquakes of magnitude 4 as far away as 300 miles. Does anyone have more concrete data along these lines? How close does a magnitude 1 seismic event need to be, or how about magnitude 5, etc?

unfortunately, we don’t have such data breakdown by magnitude and distance. I could tell you my personal experience with an RS1D, but it would not constitute the average, just a single case (and even an outlier, since my Shake is not placed in a vault).

I think that you can find some answers by looking through seismology literature and peer-reviewed papers online.

What you’re asking for is very difficult to do in general because it depends on the background noise at the site.
For example, I have 2 RS1D machines: one RC144 in a remote location with no traffic, the other R00B9 in the city 50 m from a busy thoroughfare on one side and 50 m from a railway line on the other. Here is what they recorded for a 4.5 EQ at 10 km depth 918 km away:

You can see that RC144 in the remote location picked up the EQ no problem, but R00B9 in the city picked up nothing because the signal was contaminated by noise.
However, if the EQ is nearby and it is large enough, both instruments will pick it up.

In addition to the problem of background noise, there is the nature of the EQ itself. We have had hundreds of EQs in the last few days off East Cape in the North Island of New Zealand about 1000 km away, many of them magnitude 4 or greater, and 10 to 50 km in depth, but only some of them have been picked up by my RC144 machine. Why is that? I plan to work on this by comparing the signal from a seismometer near each EQ with the signal from my RS1D machine (when I have time)…

Tide Man: have you figured out why you cannot receive all the quakes in the Kermadec islands? They continue, and if they are not real, they are poisoning the data. I cannot see a one. I think a mouse got into someone’s geophone

Bob
I assume you’re talking about ShakeNet? But I can see the Kermadec EQs no problem: 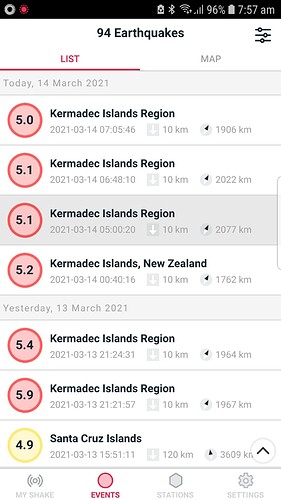 However, my RS1D is about 1800 km away, so it only feels the largest ones.

Yes, I meant if your Shake is receiving them. I am surprised at the numbers of quakes. It’s not national news, although Iceland is, so am surprised.

Are you saying these Kermadec earthquakes are being detected in Iceland?
If so, that’s remarkable!
My RS1D on Banks Peninsula, 1800 km away, is only detecting those with magnitude 6 or greater.

I am not detecting any of the Kermadec quakes, or, at least, not since the initial big one.

They’re not news because they are 1,000 km from the nearest civilisation.
Raoul Island is close-by, but it’s been uninhabited since lockdown (Mar 2020).