I would like to know if gun shots have a unique signature? Can you tell the difference between fire crackers and gun shots? I just bought my RBoom and I am so excited to see what I can’t hear.

I would like to know that too. We get both around here occasionally.

Doing a Google search came up with the following article that might help. Scrolling down past the section “How does ShotSpotter work?” there are a couple of examples of gunshots and fireworks waveforms generated by sound files by ShotSpotter. Don’t know if the Boom would generate the same kind of waveform but, next time you hear what sounds like gunshots/fireworks, check and see if it matches either of those.

Chicago is paying millions for technology that detects where gunshots occur. But it’s not clear whether this helps solve crimes.

I believe I got my first one that sure sounded like a gunshot. Surprisingly, it was detected by the Shake. The Boom did not detect anything. 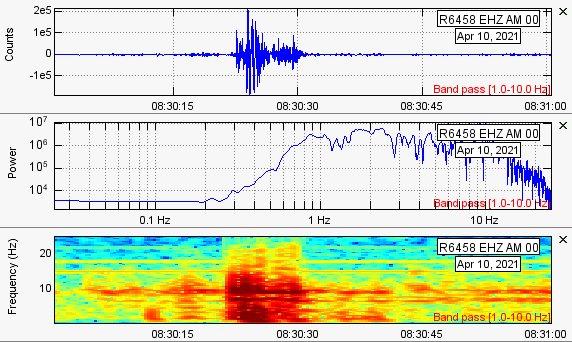 I get lots of recordings when the marines do their training at Quantico about 40 km from here. One that registers well is an 80 mm Howitzer. It shakes the ground and sends infrasound. You can find my postings somewhere on this.

But I think the sound energy in a handgun is mostly at higher frequencies and would not register on RB. I suppose explosions that show up on RB are either big (cannons, building gas explosions, thunder) or slow (black powder fireworks).

The recordings in that paper were digitized at a 48,000 s/sec rate as opposed to the 100 s/sec that RB uses. You can see that there is a very short shock wave followed by a “muzzle blast”. But both are too fast for RB.

As you probably know, police and military use a commercial version of sound detection to locate gun shots: Gunfire locator - Wikipedia .

I am interested in the subject and someday perhaps something open source will appear on Hackaday or a similar web site.

As an experiment I made a Raspberry Pi data grabber fed by a 4-channel USB digitizer that can go as fast as 192,000 s/sec. It records one minute “chunks” of data to a solid state disk NAS. I connected 3 microphones and a 1/sec GPS reference “tick” as inputs. Simulating a sharp noise by clapping two hardwood blocks together, I was able to get timing results that could be used to triangulate the direction of the sound source. But I am not facile enough to write software that would automate this process.

My idea would be to have two of these microphone arrays several hundred meters apart from each other to accurately locate the source of the “shot” (or other interesting sound).

By coincidence, I went out for a jog this afternoon and one of my distant neighbors was “exercising” a rather large gun (shotgun perhaps). When I was south of here I could hear the gun’s discharge clearly and a lot of reverberation. When I came back this way, he fired the gun a few more times and I could not hear the discharge of the gun, only the reflected/reverberating type sounds. So that is what RB was recording. As you can see from the recording below it is very difficult to tell much - not really possible to even identify the individual shots - when there is a lot of reverberation. This reverberating “rumble” does contain a lot of low-frequency energy that is captured by RB - however not of much use. A “shot-spotter” program would be unable to locate anything from this. But if you had a relatively clear line-of-sight to the gun’s location you might see something interesting on RB.

There were perhaps 15-20 over-the-horizon gun shots during this stretch of recording.