As a ham my location is challenged by RF noise from my radios. I found the Raspberry Shake to be VERY sensitive to RF interference. Even my 900 MHz low power transceiver for my weather station was enough to cause spikes 40 feet away from the shake when it was in the house! Needless to say keying up an HF radio at 500 watts makes a rather large impact on the data.
Being in a smaller urban lot there is no good way to separate the shake from the antennas with very much distance. I also wanted to get the shake out of the house to lower the urban noise from life a bit. I am also 60 feet from a 4 lane arterial roadway with cars and heavy trucks going by at 40 MPH. I know that it will not help with the traffic noise at all.

I picked out a spot in an old unused raised garden bed that is 5 feet by 5 feet and about 1 foot above the grade to be the spot to place it. It is out of the way of foot traffic and I figured that the extra foot would help with the possibility moisture intrusion in the event of puddling rainfall. I know that here where I am in the Central Valley of California that any hint of bedrock is several hundred feet below the ground so I am not even considering any sort of borehole, just a small hole a foot or so below the vault in contact with compacted earth would suffice for me.

Next came the question of “what”… how would I accomplish full RF shielding. I could pour concrete walls with grounded screening in it but that would be a pain to construct. The it hit me, how about a galvanized steele garbage can? They are outdoor rated, water tight, have a decent fitting lid, and are reasonably cheap. So off to the hardware store I went and picked up a shiny new 40 gallon galvanized steel garbage can. This should work perfectly as an RF tight enclosure and also keep the water out with just a little silicon sealant on the rolled seams and perforations for the handles. While I was there I picked up a half dozen cans of Great Stuff foam and some 60 lb of ready-mix bags of concrete.

I dug a hole about 4 inched larger than the diameter of the can and about 8 inches deeper than the can is high. I flared the bottom of the hole out about 6 inches at the bottom to provide a foundation of sorts and made about a foot deep 6 inch bore hole in the center to provide horizontal stability in the soil. I mixed up the concrete and poured it into the hole until it was above the level where the bottom of the can would be with about 4 inches of the top above grade. Next I punched a dozen or so 1 inch holes in the bottom of the can and then plunged it down into the concrete. Shaking and wiggling the can to get all of the air out of the bottom indentation and moving it down to the depth I wanted the can at. Now the can is in the hole and the top is about 4 inches above the grade. Next I poured about a 1/3 of the can full of concrete and then the remainder I poured around the can to fill some of the void in the walls of the hole up to about half way up the can. At this point I had about 120 lbs of concrete in the can and hole. I leveled the top of the can continued checking the level a few times early in the process to insure it stayed where I wanted it. Now… we wait for the concrete to set for 24 hours. 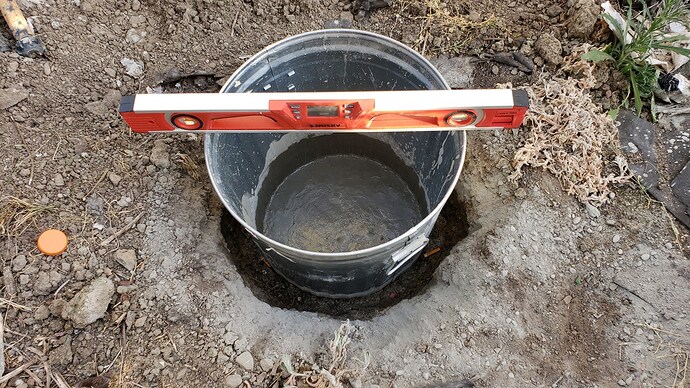 I put the lid on the can over night 2 days later and the next morning it was covered in condensation… This is bad! The concrete is wicking moisture both from the set process and from the ground around it via those holes I punched in the bottom to bond it all together. How do I solve this problem I asked myself? I needed a way to seal the concrete to keep the moisture out, this was supposed to be water tight after all. Trip number 2 to the hardware store… I looked at all sorts of concrete seal stuff at the store. Most of it did not want to be applied for 28 days. 28 DAYS!!! Who has that kind of time, I want it all and I want it NOW! Then I spotted it, Envirotex Lite Epoxy Resin Coating. This stuff cures to a hard surface and is impervious to water, it would be a perfect seal poured into the can and even bond to the can surface. An impenetrable vapor barrier to seal the concrete. I picked up the 16 oz kit figuring it would put about an 1/8 inch layer on the bottom of the can. I mixed it up per the instructions and poured it on the bottom of the can. It spread out and completely covered as expected, and get this, it is self leveling…

Perfect. The tempurature was dropping fast as the sun went down and I needed to keep the temperature up for a proper cure so I hung a 100 watt spot bulb in the center of the can and covered it with a tarp overnight figuring it would keep it 90 to 100 Fahrenheit in the can. The next morning the resin was cured nice and hard and is now a perfect moisture barrier. Next I used silicon sealant on any remaining seams in the can and the punctures for the handles. I put the lid on the can overnight and the next morning it was all bone dry. Success!

Now to get the power and Ethernet in the can I punctured a hole in the side of the can and ran the cables through. The I used copious amounts of silicon sealant to seal up the hole and hold the cables. To help keep RF out of the can I used ferrite cores with a few turns of each cable on them right at the entry hole and then buried them slightly below the dirt. For the Ethernet back-haul I chose a TP-Link CPE210 configured in client mode and placed it on a pipe several feet away from the hole pointed at the house. The POE injector was placed in the can and attached to the CAT5 exiting the can. The CAT5 to the Raspberry Shake was choked with another ferrite core to hopefully do away any stray RF just before it went in the Raspberry Shake LAN jack. The power to the Raspberry Shake was also given a ferrite core right at the RS.

The last step was to foam up the inside of the lid for insulation as well as the tub I used for the extra outer cover. I back-filled the remaining hole with dirt and tamped it down a little. I built a bit of a mound to redirect any water away from the can opening leaving just enough of the top metal exposed to close the lid on the can. 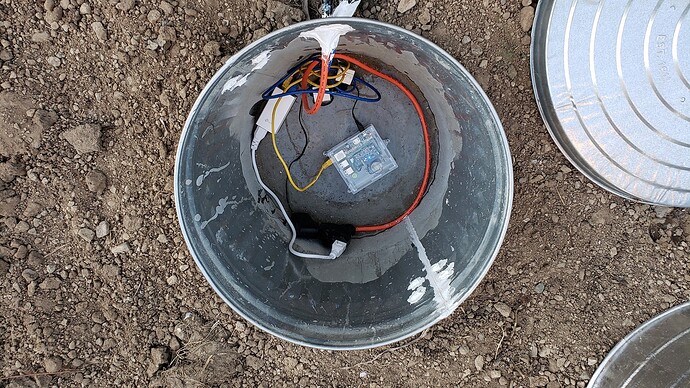 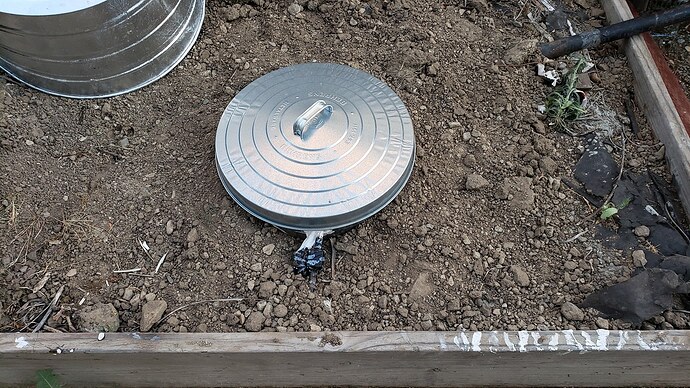 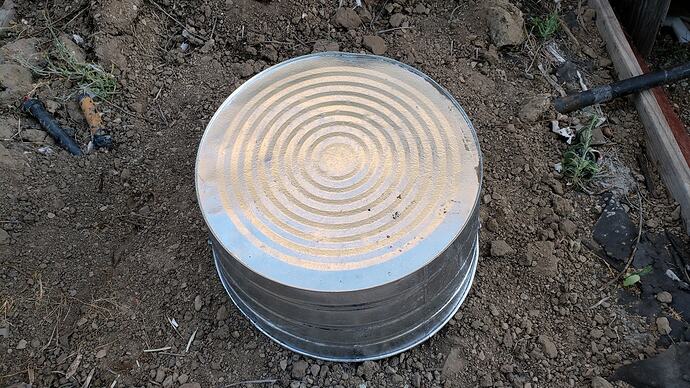 Overall this was a complete success and meets my needs. Continued checking of the can I find it bone dry in the morning but I will still be adding a desiccant pack just to be safe and continue to monitor it.As seismic events unfold in Nevada and Central California I continue to be impressed with the sensitivity and will say it is much less noisy than in the house.

You can watch the RE9A7 Raspberry Shake livestreaming on youtube at https://www.youtube.com/channel/UC_Kteu5qFnOQhmfcIa9VpAw/live

What a story! Loved it. Thank you for sharing this.

Fantastic write up and great end result.
I am a ham, but not very active, so I really admire the effort you went to so that you could enjoy both hobbies!

I notice that all the RPI-shakes installations don’t have a retaining strap to prevent the RPI-shake from jumping around and shifting during a strong earthquake.

What will this do?
I am guessing it will zero out the error from the RPI-shake bouncing around.
Is it a good idea or not ?
In a 7.1 earthquake things will slide. Been there, done that.

Have a good day. Play safe.

Initially, non-IP67 geophone-only models of the Raspberry Shake did not come with a way to fix them to the ground because any earth motion that would cause the sensor to “hop” would have already saturated the geophone sensor.

Good article! I am still struggling with shielding my 1D against RF. While I don’t operate high power, I do have my antenna mounted indoors about 20 feet from the seismometer. The first step was to put the shake in an aluminum enclosure. I attached a wire from one of the spacers on the case to the box. Apparently this is not an RF ground as keying my transceiver at 50 watts on 20 meters still resulted in huge spikes. I then changed the ground point to the shield of the USB socket. This worked in bringing the spikes down to a reasonable level. To reduce noise further I wrapped the case in aluminum foil as a Faraday shield. The ethernet and power cables have snap-on ferrite cores where they enter the case.

The attached heliocorder image shows where I am now. RF is still present, but not at the levels that it was.

I checked my desiccant pack this week and it is still indicating as dry after close to a month. This includes a week of pretty good rain. I would say my design is working well to keep the moisture out of the vault!