Lots of activity in western Panama the last 24 hours

Three quakes have shaken RS HQ in the last 24 hours! The first was a M4.2 just south of Boquete at 9:15 local time last night, then a M5.3 in eastern Costa Rica 25 minutes later. Then this evening, we had another small one around the same time (9:19 pm), a M3.5, which due to its location I suppose is probably an aftershock of the M4.2.

The first one in the sequence was the first earthquake I’ve ever felt, and I’ll never forget how strange the sensation was. I really did hear it just before I felt it, which in itself is a phenomenon I didn’t think I’d ever get the chance to experience. There was a brief, maybe quarter-second sensation like a train was passing through my backyard, and then the windows started rattling and the entire house began to move around me. Even though it didn’t shake much, the feeling of being almost helpless against the power of something much larger than me was quite tangible.

The second one was much lower frequency and longer lasting, stronger and more noticeable but also somehow less alarming. I would say I felt it for close to 45 seconds, but I didn’t really have a good sense of time, so it might as well have lasted 5 minutes. I also very distinctly noticed a more violent uptick in motion upon the arrival of the S-wave, which maybe would have scared me if it were any bigger

Because the first two were the first earthquakes I’ve ever felt, I didn’t have enough of my wits about me to save replays from our livestream, but I was able to save the M3.5 from this evening:

Luckily, the software I wrote doesn’t suffer from adrenaline-based amnesia like I apparently do. Here are some nice RS4D plots from my house showing trace and frequency activity on both EHZ and ENZ during these three events:
Eq 1: 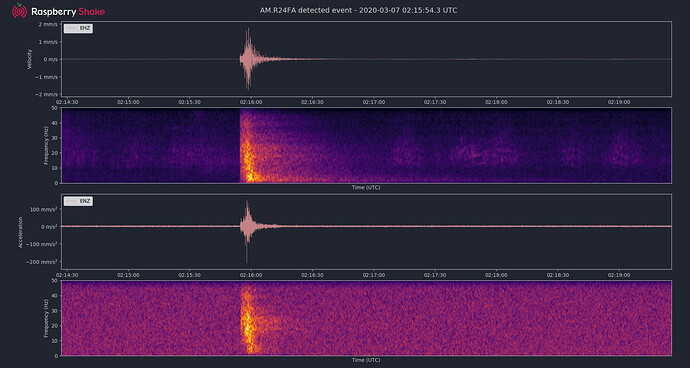 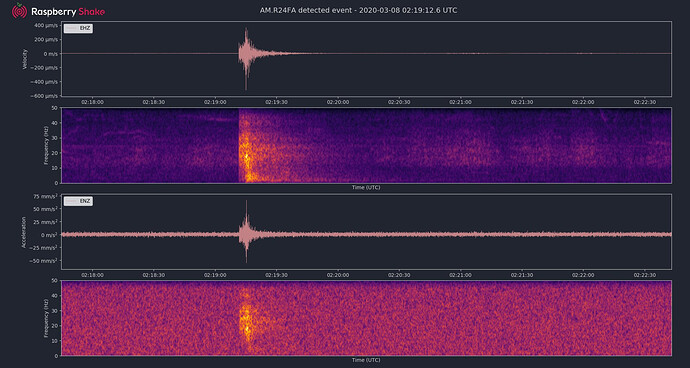 image1905×1017 422 KB
I have rsudp running on a Raspberry Pi 4 and in 2 / 3 of these events the alarm sound actually started to play before I noticed any vibration on my own, so in those events it really was a useful tool to get me to pay attention. In the case of the Costa Rica quake, the alarm started to go off nearly simultaneously with my noticing its vibration.

Anyway, maybe you can’t already tell, but I really love this software and am very proud of having been able to help bring it into the world and maintain and improve it. Hopefully others are getting as much enjoyment out of it as me.