It’s been already 4 years that I’m sadly impacted by something bad in my home’s environment. Something stressful, able to run for a few minutes sometimes, sometimes 40 hours, highest times was maybe 100 hours. Making sleep impossible, feeling like on cafeine even when totally exhausted. At first glance I thought it was something related to Water Sewage, or Water supply distribution. I cut all the things in my home, proceed to many checks, had electricity contractors to the house, to check and upgrade things. All in vain. Then I suspected my neighbours, restaurants, backery… but when they were in hollidays, the trouble persisted…

The house is one century old, one basement, one ground level, 2 higher levels. 20X10m of garden, in a city center. I’ve lived so many years there, and also in different other places, lived in 4 different countries, did travels for hollidays in others. I never ever noticed what I’m nowadays experiencing before that time.

Making health checks, Doctors tested me in really good shape on all aspects, neural, virology, heart and so on… It could also be related with type of ground, humidity and electrolyse under ground… It could also be related to Smart Grid, and EMI. An untold topic in France. Or a mix of both. I’m really not helped by the french state.
Second fact : I’ve found during those 4 years that I’m not alone. Many people are more or less complaining with their own words about the same havoc.
I’m curious and stoicist enough to bust the cause of the problem.

As I never found any public servants able to come and monitor my trouble, even if terribly asking for it, I started to monitor the trouble on my own.
First with some smartphone app. It was limited, unable to record over time and archivate the measures made. So I focussed on some piezo-electric sensors, cheap, with good responsiveness. During that 4 years period, I’ve cabled my home with Ethernet cables.
I’ve build a small solution, some piezo-electric sensor connected to an arduino mini, plugged into a raspberry pi. A daemon coded in C is gathering each 10ms (nanoseconds, figure from the piezo-electric sensor), sending by period of 15min measures to central server -> Flooding an influxdb server, then graphing with Grafana. I’m at the moment giving some lectures on R langage to access my influxdb datas and try other types of graphs, applying Fourier transforms, f’, f’’…
To handle any surge or power failures, I’ve put all my sensors behind some POE switch, themselves connected to UPC. I can shutdown power coming from the grid for like 30min and continue to record. If doing so, the “noise” continue, by that time nothing is working in the house (except for those sensors). 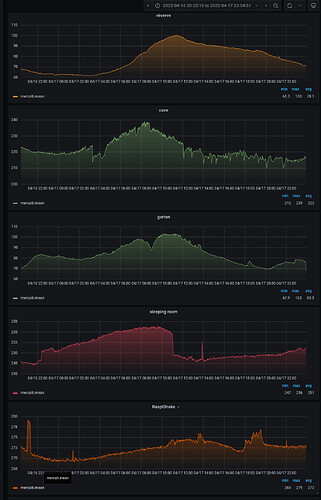 I also added some microphones in the house, to bust on large scale, then zoom on 25-300Hz, frequency spectrum since sometimes what was a “vibrating” feeling becomes audible.
After a recent weird story in France, located in 3 villages where all the people where severely ill, I gave an attention to infrasounds.
As I own a sinewave generator, I did some tests, confortably sitting in my office’s leather chair, listening to sinewave, modulating its frequency, with some audio-pro headphones, feeling after a few minutes of listening the same effects I was expecting to be vibrations on the ground.
According to Wikipedia, on the Infrasound’s page:
« Air is a very inefficient medium for transferring low frequency vibration from a transducer to the human body. Mechanical connection of the vibration source to the human body, however, provides a potentially dangerous combination. »

It took me quite a long process before discovering Raspishake project. I bought first the RaspiBoom, summer 2021. After a few tests, I finaly put it into my basement. Even if it’s 3 meter under ground, I notice it reacts a lot when it’s windy outside. I also maybe lack a bit of understandings on some datas representation like the frequency spectrum.

Now I just bought the RaspiShake 1D, received it and started to record and experiment installed into a corner of my sleeping room, the closest to the backer’s house, the dirty neighbour.

I would like to monitor at best the trouble I’m facing, not necessary the « quake project » you handle. (I’ll do that once I’ve put a name or facts on what is hammering me for years).

As I just received my RaspiShake, and to bust all those noise events, I’m wondering if I should install it upstair, or at the basement. Correct me if I’m wrong, I’ve read that infrasounds and shakings comming from the neighborhood, are higher the highest you go in a building.

Concerning the RaspiBoom, I saw a thread someone wrote, to lower wind noises(?), connecting the raspishake’s hose to a bigger watering hose, filled with foam on its edges. Would you do this ?

Last detail. I’ve put some barometric and temperature sensors outside, to be sure that my prejudice has nothing to do with weather. Which is verified.

Coupling RaspiShake, Boom and my own sensors, I want to be able to present facts about this discrete trouble.

(The length of the stress being there for so long now, my only exit door seems to sell my familly house, and leave the shithole France has become.
I sometimes wondered how people living in big seismic areas do, if it’s hurting for the body. It made me think that Hamocs come from those areas. I bought a hamoc and sleep on it. It resolved my trouble for a time, except on some rare “high intensity” nights.
My backer neighbour just added recently a new 400A powerline cable to his house, connected to the grid. The trouble is more aggressive since and I’m facing troubles like when I wasn’t sleeping in a hamoc, waking up at nights when he is producing his dirty bread.
Last test: Sleeping on a boat at the harbor, out of the ground, out of the grid is like a dream)

Thank you for any tips, any advise. I’m curious of all datas.

The first thing that comes to mind is to ask if there have been any electrical generating windmills (éoliennes) installed with a few km of your home? They can cause the sorts of problems that you describe, although it appears that the French (and other) governments try hard to ignore this. Howevder, you might be interested in this:

A long time ago, I remember reading a paper on research into infrasound weapons, particularly for crowd control. At the time, they were claiming that somewhere ~5Hz was generating best results, although later research indicates that the average standing human body is resonant ~10Hz.

Whatever the actual frequency, with enough power behind it, pretty much any vibration in that range causes unpleasant feelings. Those frequencies coincide with that of the “sails” of the larger “windmills”.

So I would be concentrating on looking at that range (say 5 to 15 Hz) to see if there is any sort of signal (probably infrasound) that coincides with your unpleasant experiences.

With the R-Boom, you can remove most of the wind “noise” with a filter. it is mostly very low frequency.
Here is a wind-storm at my house:

If we look at a segment of this, it is dominated by that low frequency wind noise:

But if we apply a filter:

The frequency plot is the amplitude of the frequencies across the entire (selected) range. As far as I can tell, this is NOT filtered, but is still useful. This is the plot for the windy period:

Compare to a similar period earlier, before the wind began:

You can see that the lower frequencies in particular are much higher amplitude with the wind.
This is all fairly broad-band noise.

However, looking at something just before the wind started, we see this:

and if we look at the frequency plot:

Looking at the spectrum we see why:

That is a large, twin rotor helicopter flying over the house. Two of the bright frequencies correspond to the two rotors, and the third is probably the engine.

If there ae specific frequencies that occur when you experience your symptoms, they may well be visible on the frequency/spectrum plots.

Hope some of this helps/

Thank you for your tips Philip. I’m aware about windmills, It’s some “nearfield” topic, but I have a 4 years’ background to point the EMI. There is a single windmill, 10km away from my home. I had it in mind as hypothesis but it’s really not. I make my best to keep on Empirism and science. As EMI is nowadays a topic full of trash.
I’m impacted by 12 out of those 14 troubles listed here: https://i.imgur.com/QmcBais.jpg

What you wrote me is really usefull by the way as it will offer me to improve my measures.
cheers.

A single wind turbine 10km away is unlikely to be the problem, I agree.
I also agree that finding any sort of good information on EMI/EMF effects on living things is hard due to the amount of obvious garbage on the subject. These days compounded by people not really understanding what 5G is and blaming it for all sorts of impossible effects.

You probably already thought of this, and maybe even did it, but it would be useful to contact those other people you mentioned that are feeling the same effects and see if you can convince them to begin keeping a log of the time they are affected, and what they experience. They should do this without any discussion with each other. After a few weeks, collect the logs and compare to see if there is correlation between times and effects experienced. Keeping the observations independent and being able to demonstrate correlation should help in gaining the interest of someone equipped to dig into exactly what is happening.

It’s about low frequencies EMI, so Dirty Electricity on my case. My hypothesis being it has something to do with some particular RLC circuits the french supplier remove from transformers. It is said on an audition before the Senate that only 5% of people are subjects to the trouble; I’m sadly into. I try my best to learn from it and stick with compiling datas.
Next step will be on of those pretty cool Gauss Meters:
https://www.pce-instruments.com/eu/measuring-instruments/test-meters/gauss-meter-tesla-meter-kat_40056.htm
A friend jokes on me saying I should now found a company to help (the few) people in my case.
I reply saying it’s not a wealthy business IMHO.
cheers

Hello Philip,
I’ve watched during this night your SB, and compared to my B at the same time, found a third one in central France. Playing with the log scale and levels on the Android App, I see your node and the other one are clean of noise, when mine is deeply saturated. Nights are very “hard” those days. Nightmaresque could be a good word.
As I’ve gathered EMI detectors and took time to weight PROs & CONs, monitor things around me, I come back to the infrasound problematic. To be carthesian, I live on a hammoc, I removed every source of electricity from my sleeping room, and I’m “dancing” the same in troubles.
I will put more efforts in the following weeks to truely learn about managing that wonderful tool RaspiBoom.
ATM the raspishake is in the basement and the raspiboom in the attics.
FIY, since a good amount of people are impacted in France at the moment, a public association has been built around that question, https://www.infrasons-france.fr their website is informative.