It must be fun to watch the RBoom on 4th of July. Anyone have pics of their Boom activity from past 4th of Julys? 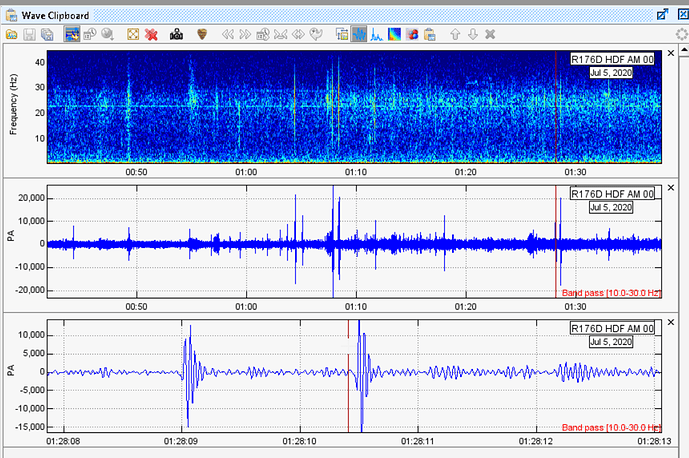 Well - its not that exciting. Fireworks are usually pretty small amounts of explosive. Fireworks result in a variety of “spikes” as shown on the attached swarm graph. The bottom zoom-in shows a detail from the right side where there are two blasts some seconds apart. The left blast of the pair itself consists of two detonations about 1.5 seconds apart, as you can see in the close-up. Each sound impulse lasts less than 0.1 second, so only a few cycles show up.

There are usually many (simultaneous) public displays the evening of the 4th. None of them are closer than 10 km to this location, so these spikes are from some distance away.

A really big explosion will also show up on a surface-mounted Raspberry Shake (sorry - no photo). Around my area, it is relatively easy for infrasound in the vicinity of 20 Hz to shake the ground surface. [I understand the surface of the earth is actually *resonant* around this frequency - a problem that mechanical engineers worry about in making foundations of large rotating/reciprocating machinery. But that’s another story.]

I suspect that the frequency response you see on RB, in this type of event, has a lot to do with the interaction of air and the surface of the earth.