What do you think of networking Raspberry Shakes for the purpose of earthquake early warning (EEW)? Our research project at Massey University is exploring the feasibility of using low-cost sensors for EEW. We have put up some of the recent work and activities on this blog: https://communityeew.blogspot.com/.

What do you think of using RS for EEW? Keen to know your thoughts on this.

I’m interested, but I’m sceptical…
Have a look at this EQ that occurred at Te Anau this morning. It was magnitude 4 at 7 km depth and the recorder is on Banks Peninsula, 457 km away. It’s typical of a great EQ that may occur on the Alpine Fault, only 1,000 or more times smaller. 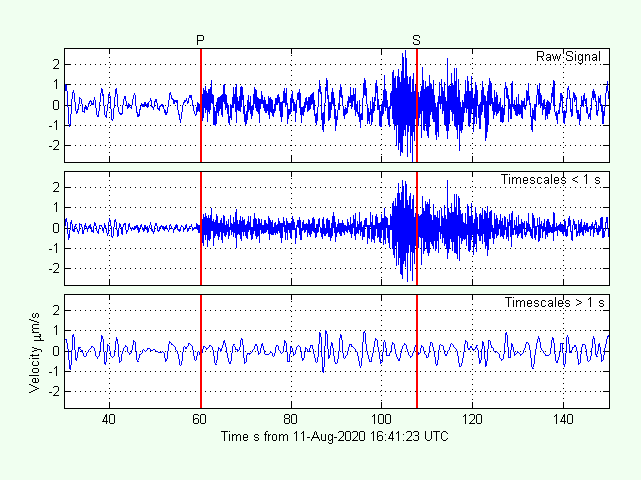 Most of the energy occurred in the S waves which arrived 47s after the P waves. Assuming we had an efficient alarm system and we got 47 s warning, would that be long enough to do anything?

Living through the thousands of EQs in ChCh in 2010 and 2011, we became adept at sensing the P waves and bracing for the S waves. We didn’t need an instrument for this. There is no sensation quite like the feeling of dread that engulfs you as an earthquake evolves. How big will this be? How can my house stand up to this shaking? Is everybody safe? When will it stop? The last thing you’d think of is going to the computer to look at what the RS says is happening.

So, good luck with your project. You’re welcome to use data from my 2 RS1Ds and Boom, though the practical difficulties of getting a hold of the data in enough time for them to be useful seem overwhelming. I’ll be interested in the results.

Thanks for the response and the offer to use your data from your sensors!

On the technological front, we are looking at the feasibility of using the network of data from raspberry shakes to issue early warnings. But definitely understand the points your raised. One aspect we are keen looking at is the social/behavioural/psychological side to having an EEWS. Definitely curious to know if 47s (or less) is valuable to people. Like you said, will it be enough to do anything? Is it creating more dread or will it prepare people psychologically?

I’m very keen on the idea of an EEWS for my home. It’s one of the many reasons I bought an RS. I know Mexico and Japan have fairly reliable systems that will alert people of EQs. What I would like to do with an EEWS is program some automation around my house. Maybe sound an alarm but more importantly have it shut off the water and gas. Since I also live in a tsunami hazard zone, have the driveway gate and garage doors open to save previous seconds in getting to higher ground.